The original application was written back in 2001 in Visual Basic 6. It is quite trivial application (despite the fact, that when I first created it being a kid, for me it was not). It is intended for easily creating hexadecimal RGB codes using sliders. I know, there are plenty of similar tools, also inform of online apps. HoweverI still like the “mechanics” of the UI and its simplicity. It turns out, that I still need it.

However, the originally compiled executable does not work on modern Windows system. I decided to check if it is possible to fix this. I took my Visual Basic 6 installation CD, started snapshotted virtual machine running Windows XP and opened source project files. The application had simple HTML editor and used a few really esoteric OCX controls. In fact, they were not essential for the application’s core functionality. After removing unnecessary references from the project and disabling some of the UI components, I recompiled the source code so that it uses only “out of the box” Visual Basic libraries. The Windows operating system includes Visual Basic 6 runtime DLL even now and finally I managed to run the application on my Windows 7 64-bit machine.

If you want to give it a try, you can download it from my Skydrive 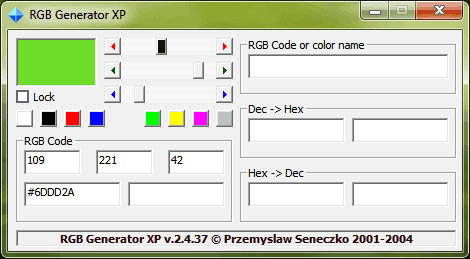